Live from Caloocan Sports Complex, Elaine Duran of Agusan del Norte was awarded as the third champion of Tawag ng Tanghalan. She earned 41.18% of combined text and judges’ votes.

During her solo performance before the announcement of final 3, Duran earned a standing ovation from the judges after giving a showstopping performance of Shanti Dope’s Nadarang.

The final 3 contenders are record holders of this season for having ten consecutive daily wins during their reign as daily champion.

The rest of the grand finalists of Tawag ng Tanghalan Year 3 includes Ranillo Enriquez from Cebu, Charizze Arnigo of Surigao Del Norte, Jonas Oñate of Samar, Violeta Bayawa of Zamboanga del Norte, Julius Cawaling of Cavite, Shaina Mae Allaga of Zamboanga del Sur, Rafaello Cañedo of Davao, Jermaine Apil of Laguna and Kim Nemenzo of Negros Occidental. It was supposed to be 13 finalists, but Mariko Ledesma decided not to push through with her fight in the competition. 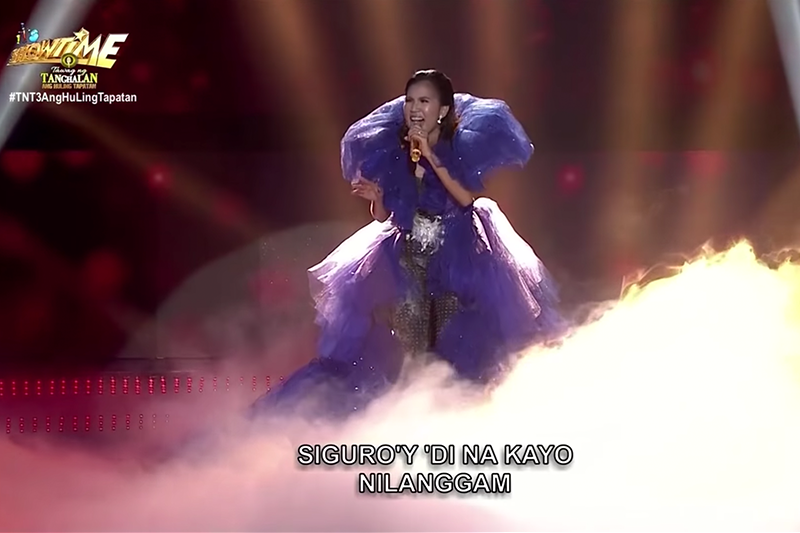 Few days before the final showdown, Tawag ng Tanghalan brought another twist in the competition whereas they will be eliminating 6 more contenders and only 6 will be performing on the live show at the Caloocan Sports Complex. Only Jonas, Kim and Shaina joined Elaine and the two JMs in the grand showdown on September 28.