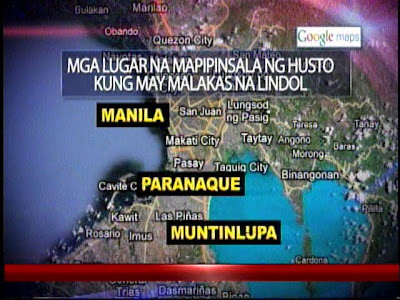 After what happen in Haiti last January 12 where a 7.0 magnitude strikes Port-au-Prince and left thousands of Haitian homeless and wounded and currently on the process of rehabilitation. The Department of Public Works and Highways surveys different cities in Metro Manila and discovered that there are three cities that is earthquake disaster prone. The cities that DPWH pointed were Manila, Parañaque and Muntinlupa, in the survey conducted by Task Force on Building and Bridges Inspection unit of DPWH they found out that most of the bridges in Metro Manila were either old and has weak foundation.

In Manila most of the buildings should be built 5 meters away from the main road but its not properly executed same with Muntinlupa and Parañaque. While the Quirino Grandstand in Luneta DPWH discovered that the said building cannot survive an 8.0 magnitude earthquake where as the building have fissures and cavity on the walls and roof on the lounge area. According to DPWH on their interview with TV Patrol World they mention that 80% of the socialized housing in Metro Manila is not safe in case that a strong earthquake hits the Philippines, where the facilities and materials used on building the houses are low quality and it is not under the building code. They also discovered that there are two bridges located in south super high way that has possibilities to collapse because that the bridge is already worn out and the only thing that made the bridge intact is shoring beneath it.

DPWH will be doing a report on the survey they conducted and will give their recommendations on the areas that needs improvement.

I was hoping that after the survey that DPWH conducted we should not end on recommendations alone which most of the government agencies do, magaling lang sa umpisa or ningas cogon where they only acted if there are urgent matters and after the investigation and recommendation everything ends there and there is no proper execution. What happens in Haiti is an eye opener, but I hope that we should not wait on things like that to happen before we act or blame others on things that they should have already done.