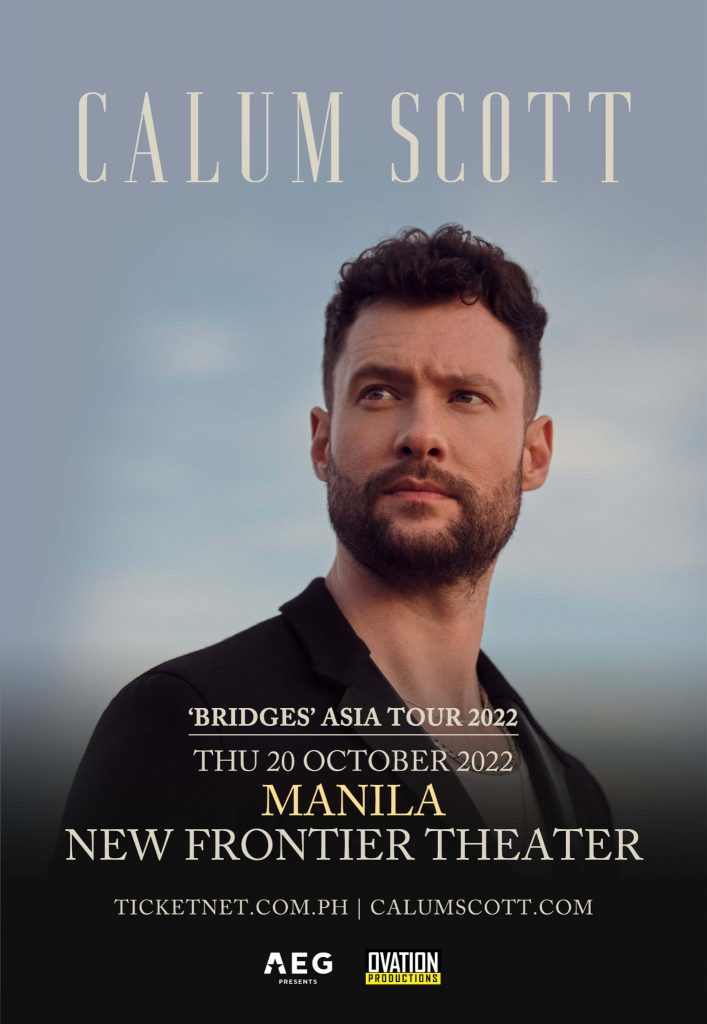 He will come back to Manila on October 20, 2022 at New Frontier Theatre. Promoted by AEG Presents Asia and Ovation Productions, tickets will go on sale on Wednesday June 15 at 10am local via ticketnet.com.ph

Calum will kick off the Asia tour in Tokyo, Japan on October 18 before performing in Manila, Bangkok, Jakarta, Kuala Lumpur, and Singapore.

Says Calum, “It feels so incredible to announce my Asia tour! It’s been a long time coming and a lot of planning but after the last few years we’ve had, you can just tell how excited people are for live music again and I’m so happy to be a part of it. I am coming back with my band to play the songs that people discovered me on, as well as new songs from my second album which I would say is my best and most personal work yet – I can’t wait to see you there.”

Calum has announced that his highly awaited sophomore album Bridges will arrive on June 17. The fourth single released from Bridges, “Heaven” once again reveals Calum’s gift for finding unexpected ways to express universal emotions. “As songwriters, we’re always searching for new ways of saying ‘I miss you’ or ‘I love you’ or ‘I want you back,’” says Calum, who co-wrote “Heaven” with Hayley Warner(an Australian singer/songwriter who’s also penned songs for artists like Katy Perry and Tori Kelly). “‘The concept of ‘Heaven’ is the love between two people being so powerful that it is far superior to anything else, any other form of paradise that could be offered. I loved the idea of putting the power into the relationship.”

The follow-up to Calum’s 2018 full-length debut Only Human—a widely acclaimed effort that hit No. 1 on the iTunes album chart in 21 countries across the globe, in addition to selling more than 3.6 million in adjusted album sales and garnering over 7.5 billion combined streams —Bridges will also feature the previously released singles “If You Ever Change Your Mind”(a bittersweet but empowered piece produced by Greg Kurstin, an eight-time GRAMMY Award® winner known for his work with Paul McCartney, Elton John, and Adele), “Rise”(a wildly soaring track whose video features a captivating performance from British actor Georgia Hirst), and “Biblical”(a heart-on-sleeve ballad Calum later followed with an American Sign Language version made in collaboration with the Tony Award®-winning Deaf West Theatre).