Milky Chance — the eclectic German pop duo whose freewheeling, adventurous songs have attracted over 5+ billion streams and multiple Platinum certifications the world over — share their new single “Synchronize” out now. 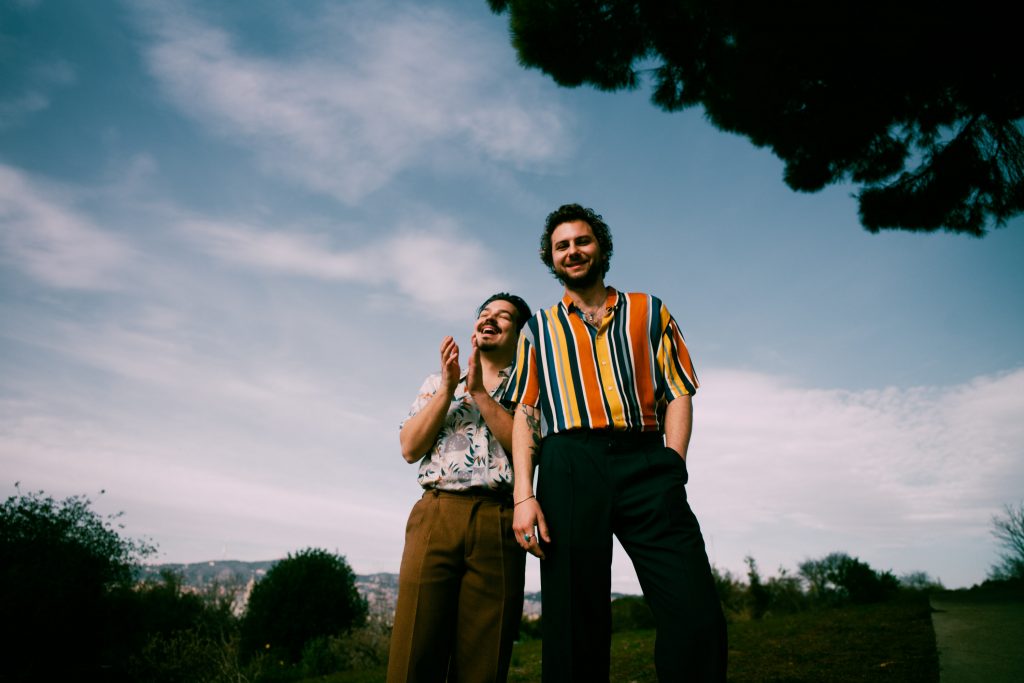 It begins with a strummy, sunny chorus inspired by The Mamas & the Papas before the bottom gives out and it transports listeners to a packed dancefloor, pulsating synths and an insistent backbeat snapping you out of a Californian daydream. It’s the type of idiosyncratic, collagist track that has catapulted Milky Chance to global fame — a sudden left turn that takes you to exactly where you need to be.

“When you’re in love and feel that perfect synchronization with someone, it’s almost as if nothing else matters,” says guitarist/singer Clemens Rehbein. “Your worries, your anxieties, they just disappear, and all that’s left is love.”

“It’s often just the two of us writing and producing,” says bassist / percussionist Phillipp Dausch, “but we worked with another songwriter and producer duo called DECCO on ‘Colorado,’ and we all had such good chemistry in the studio that we knew we wanted to collaborate with them again on “Synchronize.” Music is all about communication and connection, and working with other people put us in touch with parts of ourselves that we’d never really explored before.”

“Synchronize” follows an incredibly busy 2021 for Milky Chance. Their single “Colorado” became a streaming smash and Top 5 Alternative Radio hit that they performed on both Jimmy Kimmel Live! and The Kelly Clarkson Show. They released Trip Tape, an official collection of the covers, remixes, and demos originally featured as part of the soundtrack to their viral Road Tripping Radio series (their covers of Soft Cell’s “Tainted Love” and The Weeknd’s “Save Your Tears” quickly became fan favorites). They broke new ground with a stirring cover of Bad Bunny and Rosalía’s reggaeton hit, “La Noche De Anoche” – marking the duo’s first time singing in Spanish, their third language behind German and English. And they embarked on a massive US tour, including sold out dates in Los Angeles, Montreal, Boston, and more.

All this activity follows the 2019 release of their acclaimed album Mind The Moon (which NPR Music said introduced “new twists on the old concept of world music,” while American Songwriter said it “takes great leaps and lands in completely unexpected, but creatively rich, territory”) and their 2020 Jack Johnson collaboration “Don’t Let Me Down.”

Milky Chance have been in perpetual motion ever since the release of their star-making debut single, “Stolen Dance.” Recorded at Rehbein’s childhood home in Kassel, Germany, the track became an international juggernaut after the band posted it online in 2013, topping charts in more than a dozen countries before crossing the Atlantic and hitting #1 on the Billboard Alternative Chart. In the years that followed, the group would go on to release three critically acclaimed full-length studio records, headline massive sold-out concerts around the world, perform on nearly every late night television show, and play iconic festivals from Coachella and Lollapalooza to Bonnaroo and ACL.

Already industry leaders with their Milky Change initiative, which promotes eco-consciousness and sustainability in the music industry by planting trees to offset the carbon footprint of touring, the band decided to make the leap and go fully independent in 2021, launching their own Muggelig Records label.

“Running our own label gives us the ability to be just as creative with how we get the music out to people as we are with how we make it,” says Dausch.

Keep an ear out for more music coming from Milky Chance soon.